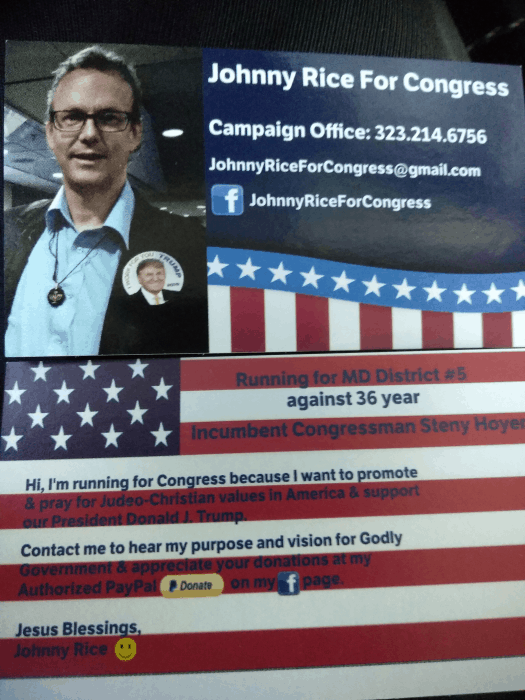 I am the Republican Candidate for Congress in Maryland’s 5th District, running against 36-year  Incumbent Steny Hoyer.

I’ve done Missionary work in West Africa for 2 years and India 2 years, and have been a Christian volunteer at many Churches and Ministries since becoming a born-again Christian in 1991. Also worked at Trinity Broadcasting Network as a telephone prayer counselor and worked at The Cross TV , as an Assistant to the President, Dr. Joseph Nasrallah.

I’m a LOYAL Supporter of President Trump, as God spoke to me on 9/11/15 that Trump is “TRUMP CARD” to flip the Anti-Christ Govt of Obama & next Illuminati Puppet Hillary Clinton & to pray, support, campaign for Trump. Secret Service nicknamed me the “TRUMPETER FOR TRUMP”, as started going to White House blowing the Shofar (Jewish Trumpet/Antelope horn). Was at WH on election night from 8pm-3:30am blowing Shofar/Praying for Trump’s victory!!!

So, one of my key Political Platforms is that: Jesus Christ is Lord & Saviour who Sacrificed His Life for The World , John 3:16 & let us pray for President Trump and help him MAGA & pray for the Love of Jesus to Heal the Hearts of unbelievers.

I will be exposing the Politically Incorrect Truth Bomb’s such as: Islam is the Satanic Religion of: Murder, Beheadings, Rape, www.islamreform.net;  as well as Alex Jones-Roger Stone’s truth bombs, that Seth Rich was the leaker to Wikileaks ; destroying the Deep State’s Fake Russian Collusion Delusion! www.infowars.com

Appreciate your prayers for my candidacy and Facebook likes/ shares of my page,